Verticillium dahliae incites wilt in a wide variety of crops, ranging from strawberries and potatoes to olive and cotton. Because pesticides are not available, effects of organic amendments on Verticillium are regularly evaluated (see e.g. my publication Suppressiveness of 18 composts against 7 pathosystems: Variability in pathogen response).

The authors tested effects on mycelial growth in vitro on PDA, on toxicity to microsclerotia in soil and on the development of wilt in olives in a pot experiment.

Interestingly, the effects of residues are reasonably well correlated between the various experiments although especially the mycelium assay is quite articifial. The various residues tested appeared to vary very strongly in their effects, from no effect to complete suppression. The two grape composts were able to suppress Verticillium wilt completely, while e.g. olive waste compost had only minor effects. On the other hand, olive waste compost mixed with 2.5% lactic acid from the dairy industry did show a very strong disease suppressive effect, stronger than when the lactic acid product was used alone. The authors suggest that the effects of grape compost were caused by the high concentrations of phenolic substances and volatile organic acids.

comments: The results should  be interpreted carefully, because the pot experiment was done under artificial conditions of sterile peat mixed with an extraordinary amount of 30% weight basis organic amendment. Hectare-wise this equals the enormous amount of about 840 tonnes of organic amendment per hectare, which is not recommendable to try out since doubtless negative side-effects will appear, e.g. because of an increase in EC, or negative effects of the phenols on soil life. So, practical recommendations are possible only after the experiment has been repeated on real soils using realistic amounts of residues. Such a field experiment may still turn out to be successful since the pathogen infestation level was in the current pot experiment also irrealistically high, 750 cfu/g soil, while in practice infestations in the order of magnitude of 20-50 cfu/g soil are already considered high. Hopefully the authors will publish more details on the chemical analyses of the organic amendments because this may give clues on which substances are most related with suppression of Verticillium wilt.

Posted on 4 January 2018by Aad Termorshuizen 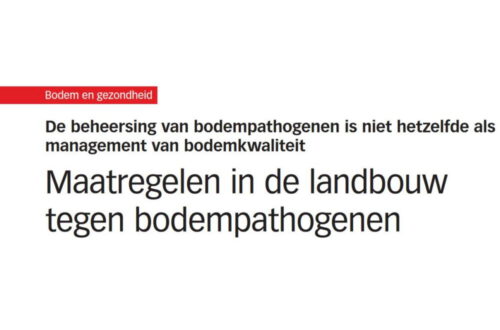